A numberplate featuring one of the most common surnames in the UK has been sold for more than £37,000.

SM11 THY was one of 1,500 personalised registrations being sold in a three-day auction in Warwickshire. 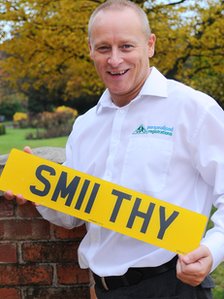 Since the auctions began in 1989, they have raised £1.8bn for the Treasury, a spokesman said.

The DVLA has a special department responsible for selecting and marketing personalised registrations.